Are your feedbacks positive or negative?

There is much confusion in use of the terms “positive” and “negative” feedback. Some folks have used negative feedback to mean a negative outcome, adding to the confusion. Here I try to clarify the meaning of positive and negative feedbacks.

Well-known negative feedbacks include predator-prey interactions driving population cycles--as prey population growth goes up, the predator population eats well and their populations increase, but then there are many predators and prey goes down (so a "+" arrow followed by a "-" arrow). Another example: if a plant becomes too dense, individuals start to compete with each other for limiting water and then they thin out (density dependence). Once they are thinned out there is increased water availability for the survivors. Plant cover can’t keep increasing (or decrease too much either) so the negative feedbacks stabilize plant cover.

A positive feedback is when there are two plusses between the two processes, such as when water availability supports the growth of a plant species (+) and more plants increase soil water (through increased infiltration and decreased evaporation) available to support plant growth (+). You could also have two minuses (-). 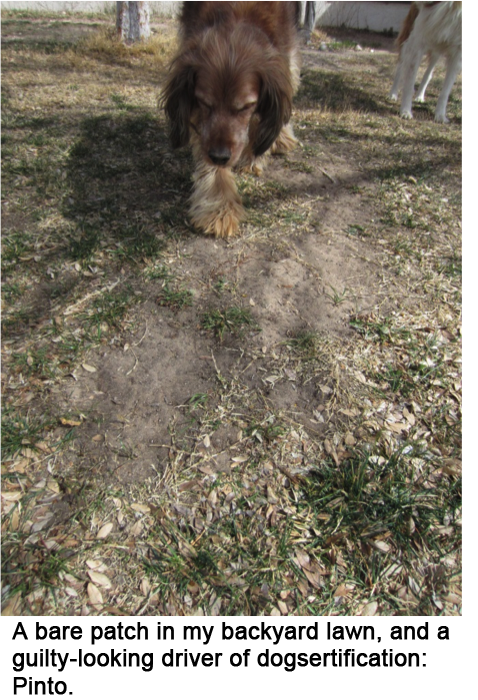 The solution to the feedback dilemma is to define clearly the points of reference and the specific processes involved. Draw a picture with two processes and two arrows with plusses or minuses connecting them. And you don’t have to have just one type of feedback in a given case.

Let’s take a case near and dear to me: the Bermuda grass-dominated lawn in my backyard in Las Cruces. The soil is an infertile loamy sand, so my challenge is to manage two ecological states: grass-dominated and bare soil (see figure). I refer to the process by which my three dogs cause the transition from grass to bare patches as “dogsertification”. Clearly, I take my work home with me.

The driver of the transition is primarily the ground “scuffing” or scratching behavior following elimination. Dogsertification accelerates through the cold, dry winter season because the plants are dormant and regrowth cannot keep up with the daily disturbances. In the spring and summer there is partial recovery.  In the photo you can see indicators of both of positive and negative feedbacks at the border between the grass and bare patches. My point of reference here is the bare state. Positive feedbacks favoring the expansion of bare patches involve several processes, including wind erosion and the tendency of my beloved hounds to scent over one another’s leavings. Negative feedbacks, a source of lawn resilience, constrain the growth of bare patches: the Bermuda grass runners are growing into the now competition-free, unoccupied space. With a little more water and warmer temperatures of summer, those negative feedbacks will lead to some recovery and my lawn doesn’t turn completely to desert.

A shift between two states is often a shift between two different sets of positive feedback loops, which can be considered a threshold or tipping point. Let’s take the classic transition from semiarid grassland to shrubland following the “islands of fertility” model. The positive feedback between grass cover and water availability breaks down because you remove plants through disturbance, leading to a collapse of the grass cover. Meanwhile, in a DIFFERENT positive feedback loop, shrubs benefit from soil erosion that deposits nutrients at shrub bases. They use their long lateral roots to compete for water with grasses. This leads to lower grass cover that leads to greater soil erosion, nutrient redistribution to shrub bases, and shrub growth. Or you could look at it from the point of view of bare ground: more bare ground, more runoff, more bare ground, in an accelerating fashion.

Many feedbacks can operate at once and interact. The threshold marks the point at which one or another positive feedback (or set of feedbacks) has the dominant effect on system change (the balance between grass cover and bare ground and shrubs). That’s the holy grail of state changes: how to identify the signals of changing feedbacks and react to them, because they precede the more obvious changes in structures and can be hard to detect.

Resilience is a characteristic of states that persist in the face of disturbance. Resilience can be caused by a negative feedback--you remove plant biomass by disturbance, water and light become more available, and plant regrowth is favored. Too much disturbance, however, and you trigger a shift in positive feedbacks: you remove too many plants and now the water leaks out of the local system with all the carry-on effects. Positive feedbacks can also cause resilience, in this case “bad resilience”. The lack of vegetation causes reduced water infiltration and reduced plant growth—a cause of persistence in desertified states (fortunately for me, not dogsertified ones).

Positive or negative feedbacks can occur simultaneously and can lead to either resilience or a transition. It depends on what coupled processes you are talking about and your point of reference with regard to the state change. If you get specific enough, the two terms are no trouble at all. And you might not even need to use them.

(Thanks to Dean Stacy, NRCS Utah for inspiring the thoughts here).

Here's some positive feedback: nice diversity of examples to explain a generally confusing concept. I particularly like using a mathematical expression to define positive vs. negative feedbacks. I'll have to give some more thought to simultaneous feedback loops, and how multiple feedbacks might affect the way I describe ecological dynamics in State-and-Transition Model narratives for ESDs.

Thanks Jamin. It seems that  narratives could describe several interacting feedbacks that are acting synergistically, but for me a primary issue is how they relate to indicators.